> what to know about

Is related to the Oleander, Nerium oleander, and both possess an irritant, rather similar to that of Euphorbia. Contact with the sap may irritate eyes and skin. Each of the separate species of Plumeria bears differently shaped alternate leaves with distinct form and growth habits. The leaves of P. alba are quite narrow and corrugated, whereas leaves of P. pudica have an elongated shape and glossy, dark-green color. P. pudica is one of the everblooming types with non-deciduous, evergreen leaves. Another species that retains leaves and flowers in winter is P. obtusa; though its common name is "Singapore," it is originally from Colombia.

Plumeria flowers are most fragrant at night in order to lure sphinx moths to pollinate them. The flowers have no nectar, however, and simply dupe their pollinators. The moths inadvertently pollinate them by transferring pollen from flower to flower in their fruitless search for nectar.

Plumeria species may be propagated easily from cuttings of leafless stem tips in spring. Cuttings are allowed to dry at the base before planting in well-drained soil. Cuttings are particularly susceptible to rot in moist soil.

In order to get the most from a plumeria plant with respect to growth, size, blooms, and scent, there is a fine balance that must be maintained. Ideally, a plumeria is in its element when it can have plenty of sun and appropriate water, so as to maintain soil moistness just above a state of dryness. On the other hand, if the plant receives a lesser amount of sun, then a lesser amount of watering is necessary - again, to ensure that soil moistness stays just above the dry state. The more sun, the more water. The less sun, the less water. A common mistake of novice plumeria growers is to over-water the plant when it is not able to be exposed to enough sun, thereby resulting in a rotted root system. Conversely, if a plumeria plant is able to receive maximum exposure to the sun, but they aren't watered enough, the plant will die.

Propagation can also be by tissue culture from cuttings of freshly elongated stems or aseptically germinated seed. Pruning is best accomplished in the winter for deciduous varieties, or when cuttings are desired.
There are more than 300 named varieties of Plumeria. 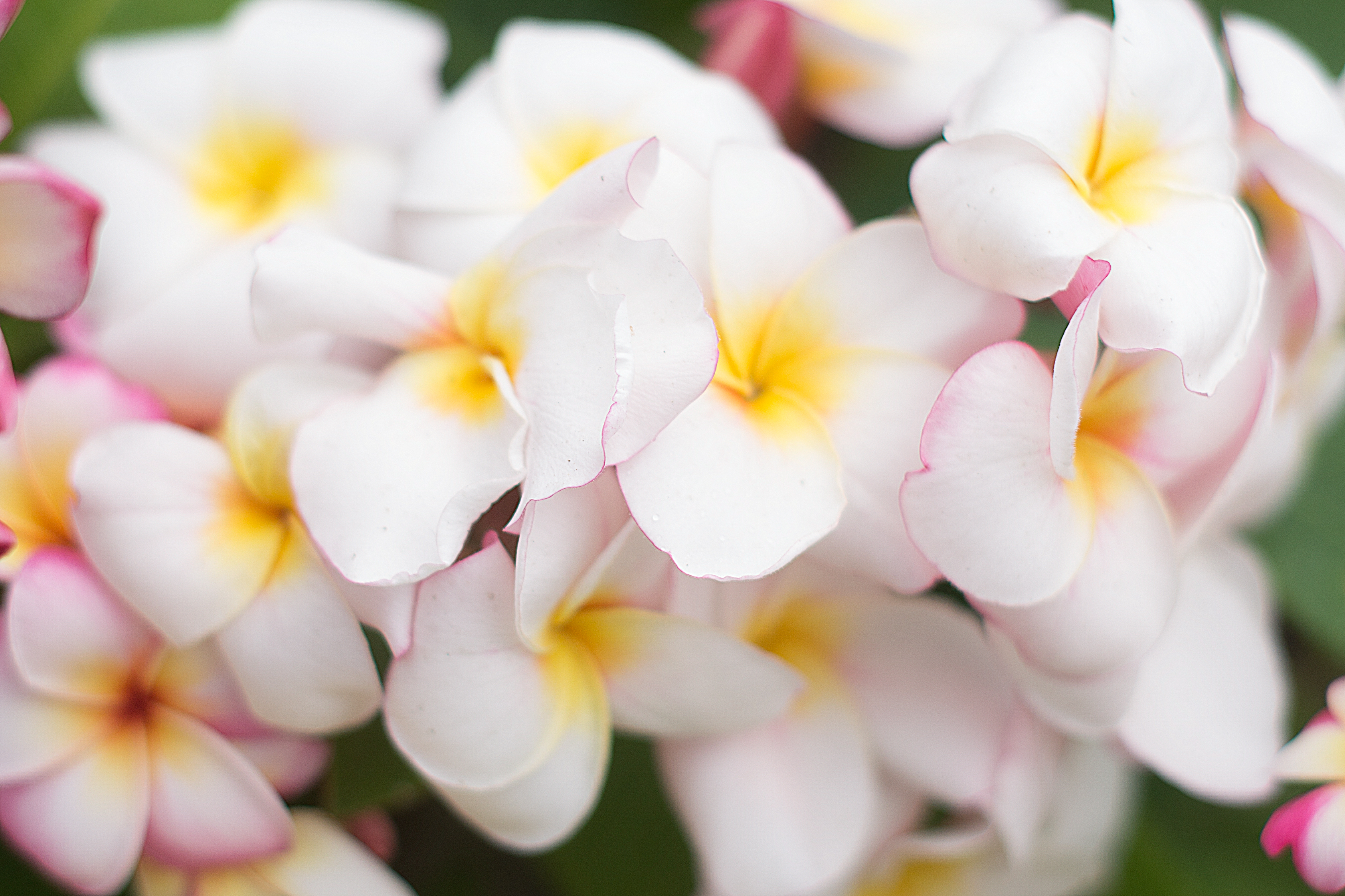 The genus is named in honor of the seventeenth-century French botanist Charles Plumier, who traveled to the New World documenting many plant and animal species. The common name "frangipani" comes from a sixteenth-century marquess of the noble family in Italy who invented a plumeria-scented perfume. Many English speakers also simply use the generic name "plumeria".

In Persian, the name is "yas" or "yasmin". In Hindi, the name is "champa" , In Marathi "Chafa" ,In Telugu "Deva ganneru" (divine nerium), in Manipuri "Khagi Leihao" . In Hawaii, the name is "melia", although common usage is still "plumeria". In Sri Lanka, it is referred to as araliya and (in English) as the Temple Tree. In Cantonese, it is known as 'gaai daan fa' or the 'egg yolk flower' tree. The name 'Leelawadee' (originating from Thai) is found occasionally. In Indonesia, where the flower has been commonly associated with Balinese culture, it is known as "Kamboja". In French Polynesia it is called a Tiare tree.

In Mesoamerica Plumerias have carried complex symbolic significance for over 2000 years, with striking examples from the Maya and Aztec periods into the present.
Frangipani trunk in Kolkata, West Bengal, India
Leaves
Flowering tree of Plumeria rubra decorating a garden in Tel Aviv, Israel.

These are now common naturalised plants in southern and southeastern Asia. In local folk beliefs they provide shelter to ghosts and demons. The scent of the Plumeria has been associated with a vampire in Malay folklore, the pontianak; frangipani trees are often planted in cemeteries. They are associated with temples in both Hindu and Buddhist cultures.

In several Pacific islands, such as Tahiti, Fiji, Samoa, Hawaii, New Zealand, Tonga, and the Cook Islands Plumeria species are used for making leis.In modern Polynesian culture, the flower can be worn by women to indicate their relationship status - over the right ear if seeking a relationship, and over the left if taken.

In some Bengali culture most white flowers, and, in particular, plumeria, are associated with funerals and death.

In the Philippines and Indonesia, Plumeria, which is known in Tagalog as Kalachuchi, often is associated with ghosts and graveyards.Plumerias often are planted on cemetery grounds in both countries. They are also common ornamental plants in houses, parks, parking lots, etc. in the Philippines. Balinese Hindus use the flowers in their temple offerings.

In Malaysia, the plumeria's scent is known to be associated with the pontianak.

Indian incenses fragranced with Plumeria (Plumeria rubra) have "champa" in their names. For example, Nag Champa is an incense containing a fragrance combining Plumeria and sandalwood. While Plumeria is an ingredient in Indian champa incense, the extent of its use varies between family recipes. Most champa incenses also incorporate other tree resins, such as Halmaddi (Ailanthus triphysa) and Benzoin resin, as well as other floral ingredients, including Champaca (Magnolia champaca), Geranium (Pelargonium graveolens), and Vanilla (Vanilla planifolia) to produce a more intense, Plumeria-like aroma.

In the dialect of Kannada spoken in the Old Mysore region of Karnataka of southern India, the flower is called DevagaNagale. In the Western Ghats of Karnataka, the local people use cream colored Plumeria in weddings. The groom and bride exchange Plumeria garland at the wedding. It is alternatively called Devaganagalu or Devakanagalu (God's Plumeria). Red colored flowers are not used in weddings. Plumeria plants are found in most of the temples in these regions.

In Sri Lankan tradition, Plumeria is associated with worship. One of the heavenly damsels in the frescoes of the fifth-century rock fortress Sigiriya holds a 5-petalled flower in her right hand that is indistinguishable from Plumeria.

In Eastern Africa, frangipani are sometimes referred to in Swahili love poems.

Some species of Plumeria have been studied for their potential medicinal value.